Booth Brewing, one of South Korea's most visible craft beer producers, doesn't make its beer where Korean beer giants Hite and OB produce their ubiquitous watery lagers. Instead, most of Booth's beers are brewed in Eureka, the California city near the Oregon border most known for redwood trees and marijuana cultivation.

Booth launched in Seoul in 2013 after husband and wife team Sunghoo Yang, a former investment analyst, and Heeyoon Kim, a former doctor, wanted to help correct the dearth of craft beer in South Korea. Part of their impetus was an article that ran a few years prior in The Economist. "Brewing remains just about the only useful activity at which North Korea beats the South," the article concluded, while declaring North Korea's government-brewed Taedonggang as more memorable than South Korea's beer offerings.

Like many South Koreans, Yang and Kim wanted to prove that conclusion wrong. So they teamed up with Daniel Tudor, the article's author, and opened a pub that served pizza and craft beer out of a Seoul alley. Their patriotic origin story and quirky branding — their bottles have colorful labels featuring the adventures of a blue creature called the Boothman — quickly attracted a fan base. Within the year, they expanded to four more locations.

"Hoppy beers, it's an acquired taste," says Yang. "The first time you try it, it's a little different and bitter, but then once you get the hang of it, you really appreciate the style and then people kind of get addicted to it." For many of their customers, trying American-style hoppy IPAs for the first time was a hard sell. "I think half the customers, when they first came to our bar, thought our beer was too bitter, so they couldn't finish a pint. But then as time passed on, that wasn't a problem anymore," Yang says.

It was a good time to join the craft beer business. In the early 2000s, the Korean government started issuing microbrewery licenses, leading to a boom in brewpubs, usually offering German-style beers like wheat beers and Pilsners. But they were only allowed to sell their beer on the brewery premises. In 2014, the laws changed, allowing smaller breweries to finally distribute outside of their pubs. 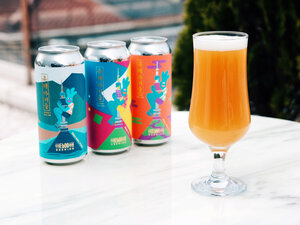 Booth's patriotic origin story and quirky branding — its cans and bottles have colorful labels featuring the adventures of a blue creature called the Boothman — quickly attracted a fan base.

Courtesy of The Booth Brewing Co.

A few years ago, Booth was having its beers made off-site by a contract brewery. But the company wanted to grow, and to do that, it needed its own brewery. At the same time, Eureka's Lost Coast brewing, an American craft beer mainstay since 1989, was also growing. Yang and Kim were familiar with Lost Coast, and when that brewery announced its move to a bigger facility, the Booth founders heard the news. So they traveled across the world to buy Lost Coast's 30-barrel brew house, and started producing beer there in 2017.

Yes, shipping the beer back to Korea is expensive, Yang says. But it's actually a better business model for them, because of access to ingredients like hops. There wasn't a distributor in Korea, so they had to import their own, which sometimes didn't make it through customs. There was also a bigger pool of brewer talent in America. And it was cheaper for Booth to make beer overseas because of Korea's tax laws, which impose larger taxes on Korean-made beers than on imported ones, much to the irritation of local breweries.

While Booth also has a small, four-barrel brewing system in Korea, the majority of its beer is brewed in Eureka and shipped back, or distributed throughout Humboldt County, Calif., and the Bay Area. The company offers a variety of beers and enjoys collaborating with other breweries worldwide as well as producing limited edition beers, such as a smoothie IPA that benefits LGBT charities.

Booth's beer offerings are tailored to the two markets. The company doesn't push its hoppier IPAs in Korea, since they're more expensive to produce and not as price competitive as other options. And craft beer has become such an established part of American drinking culture that any decent bar is more likely to have a variety of craft beers than mass lagers like Budweiser, Yang points out. "Whereas Korea, we're still in the stages where craft beer is something new, it's interesting to try, so it's something that you kind of opt for and maybe not go back to it for a while," he says.

There's a lot of excitement in the Korean beer scene, but it's still early. "The craft market in Korea is growing steadily and has a pretty wide 'general awareness' in the country, but details and a real understanding is still lacking outside of a few small groups of hardcore fans," Erik Moynihan, CEO of Seoul-based Magpie Brewing, wrote in an email. He points to encouraging signs, like the fact that there's been a spike in the number of new breweries opening, and new laws allowing craft breweries to sell their products in grocery and convenience stores.

Recently, there have been discussions in the Korean craft beer scene about what defines a Korean brewery: If the owners aren't Korean nationals, does it still count? What about Booth and Korean breweries that make their beers in other countries? "It's a whirlpool of opinion that we at Magpie are often caught up in as well," Moynihan says. "Regardless, Booth was present at the beginning of the beer scene in Korea, and really had an impact on the attention (domestic and global) that our market has attracted."

And Booth — which considers itself a "global company starting from Seoul," Kim wrote in an email — hopes to grow that market even more, with a taproom in Eureka slated to open this year, and possibly one in Los Angeles. The company also wants to expand into Southeast Asian countries like Vietnam, which have been slower to adopt craft beer than Korea has.

"Trends are really fast," Yang says of Korea's relationship with craft beer. "It catches on really fast, it goes away really fast, but we hope that this one's here to stay."

Shelby Pope is a freelance writer living and eating her way through Oakland, Calif.